Ellpagg is a former Arkn Knight, as well as a former member of The Warminds. After losing his Arkn powers and becoming something of new origin, he becomes The God of Beetles.

He is the main protagonist of The Knight Shift, and is the initial assigned Arkn to Michael of Michael's Camera. The future of mythos lore dictates that Ellpagg will be an overarching antagonist during the anthology's second act.

While an Arkn Knight, Ellpagg was initially said to have been fighting in the Arkn/Dekn wars alongside Raphael and Uriel. Raphael had described him as not the best fighter and still learning his purpose. Initially, The Arkn had debated who to cast into The Infernous to try and talk some sense into The Carver, to which Ellpagg proudly volunteered.

Throughout The Knight Shift, Ellpagg is stripped of his memories as he underwent various torment within The Infernous, from horrifying illusions to mutilation by Persophelus Redgrave, along with The Arkn and Dekn viewing his torments. Throughout his time, he declares hes going to find a way out. 14 eternities later, he is prisoner with The Carver himself, having been shot by Edgar. The two decide that they're going to escape together, but The Carver encounters his personal hell within The Infernous, being overpowered by Ellpagg. As a result, The Carver and Ellpagg get into a fight which ends with Ellpagg being the victor.

Afterwards, The Carver seems to be dying due to his vessel, Lucifer "Luke" Anton, wearing thin. In an attempt to help him, Ellpagg seeks the help of The Hethe through the infinity hallway. Instead, Ellpagg is stripped of his Arkn powers and becomes something of new origin, he becomes The God of Beetles. Upon realizing this, Ellpagg is distraught and attempts to gouge his eyes out to no avail. Upon returning from the Infinity Hallway, he finds an empty Infernous with no trace of The Carver. Ellpagg then attempts to awaken each of the ArknAngels. By doing this, he sets out to create a third neutral party and declares to end the Arkn/Dekn war by whatever means necessary.

After escaping The Infernous, Ellpagg appeared through Michael Knight posing as his Guardian Arkn, and had threatened Persophelus Redgrave not to mess with him. Together, they searched for The Condor, a skethe posing as a lurker. However, upon learning that The Condor is a Skethe, Ellpagg beats Michael and declares that he and the other Arkn aren't the good guys, in an attempt to drive Michael toward neutrality. This has shown to have failed afterwards, Michael aligns toward Deknism instead.

Upon this, Ellpagg returns and warns Michael to stop interacting with Tobias Kestler and Alex Winter. Michael then proceeds to head into The Beyond to retrieve his doll, Dale.

Knight is able to conjure Dragon's Cane, along with the power of telekinesis, which he uses in The Knight Shift to open doors.

Initially, The Knight appeared as an ordinary man (resembling Michael slightly) in the first Knight, however, upon finding the cane, his Arkn form began to convey itself through blue glowing eyes.

The Knight as he appears in [1] The Knight. 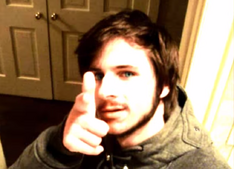 The Knight as it appears in I have to shoot myself in the face.
Add a photo to this gallery
Retrieved from "https://arknthology.fandom.com/wiki/Ellpagg?oldid=329"
Community content is available under CC-BY-SA unless otherwise noted.